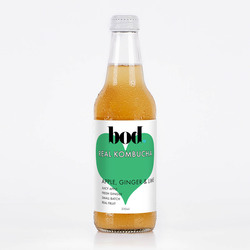 A slow fermented, hand made organic live probiotic elixir!
Unpasteurised & free from artificial colours, flavours or preservatives.
REAL apple juice & lime juice have been used & this blend has a nice ginger kick.
Made in Melbourne.

Bod Kombucha is made with loving hands by Melbourne based company Bod Conscious Enterprises and is headed up by the duo behind Paleo Pure, Emma & Nicole.

Bod “booch” really loves your bod, but mostly it loves your gut.. to be more specific. Each bottle of BOD kombucha contains an army of live probiotics, ready to boost your immune system, aid digestion & energise you. By using a live SCOBY culture, which stands for "Symbiotic Community Of Bacteria and Yeast",fermented in organic tea, some with fresh fruit & spices, we are able to create a range of authentic tasting kombucha that is low in sugar but high on flavour.

Nicole & Emma, have a passion for bringing the most authentic gut friendly products to the market. Nicole, who is a practicing naturopath, sees the majority of her patients with gut related issues and believes that a state of wellbeing depends on ones gut micro-biome status.

Both Emma & Nicole are home brewers and enjoy kombucha daily.

CERES Fair Food respectfully acknowledges the Wurundjeri people of the Kulin Nation, the Traditional Custodians of the land on which we work, and recognise their continuing connection to land, waters and culture. We pay our respects to their Elders past, present and emerging, and acknowledge that sovereignty was never ceded.